Reproductive system of an... 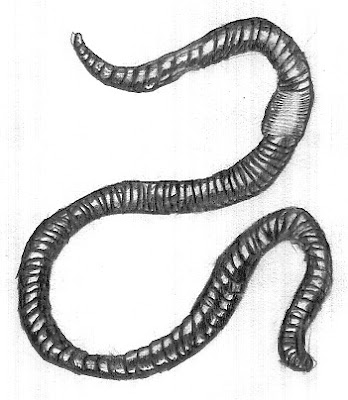 (I thought that title would get you!).

This week my son is dissecting an earthworm in science class from it's nervous system right down to it's fallopian tube..Yes, they do have one. Honestly, I never knew an earthworm had SO much in that long, slimy body.

My son and I were up till 10:30ish finishing up his science stuff from drawing diagrams of the nervous system of a worm to looking up on the internet where the heart chamber was connected. After, an afternoon of much homework then a Spring concert, I must be honest that I was zonked (is that a word?)

Around 10:00, my son looks at me and says "Isn't this fun, mom??". My first thought is that I have learned more about an earthworm than I EVER wanted too but then looking in his "excited" eyes---I said "Yes, it's fun with you." This morning, when my son was getting his shoes on for school, he asks if we can look up some more stuff on earthworms. I told him I thought we were done.

He says "We are done but I thought you wanted to know more about them! Maybe we can dissect one tonight together.".

Simple Thoughts by Shell in your Pocket on Wednesday, May 12, 2010

Oh, I've been down that road before! Blech!:) Would you believe that Brittany's forensics class just took some fetal pigs and buried them? They're going to check on them daily to follow their decomposition. She think it's so fascinating! :)

Oh YUCK....I'm sooooo not looking forward to the Science projects that I know are coming in middle school!

AHHHH..
the joys of motherhood..
and a son!
You are in for such a treat..
It only gets better and more interesting the older he gets!
at least, he is comfortable with you..
and enjoys sharing with you!
cherish these times..
they pass way too fast..
warmest hugs..
Loui♥

We had to dissect lots of animals in my biology classes in college but I can't say we ever did any of that in our elementary or junior high or high schools. I'm impressed he's doing that!

So cute. I'll be thinking of you :) it's my turn to be zonked tonight,
xo,
LuLu